We are in the middle of an unprecedented crisis. We exist because our government is refusing to introduce the necessary policies to keep its citizens safe. Instead, they are still helping the very industries that are putting our lives in danger. We take creative, peaceful and sometimes disruptive action, to compel our government to take necessary measures. Why? Because history has shown time and time again that civil disobedience is a very effective way to bring about fast-paced change.

This is what we're fighting for

0. CLIMATE JUSTICE FOR ALL: We demand a just transition that centres the needs and voices of those on the environmental frontline and holds to account those most responsible for ecological breakdown.*
1. Tell the truth about the climate and ecological crisis that threatens our existence and communicate the urgency for change.
2. Act now to halt biodiversity loss and reduce greenhouse gas emissions to net zero by 2025 in a just and fair manner.
3. Let citizens decide by establishing a Citizen’s Assembly which takes the lead on climate and ecological justice.

* We are in the process of implementing ‘Demand 0: Climate Justice for All’ in our movement. This summer, a national People’s Assembly organised by Extinction Rebellion supported implementing this demand. However, we recognize the mistakes XR has made on this topic in the past. That’s why in a ground-up process, we want to go through all local groups as well so we don’t only officialy implement this demand, but really integrate it. You can read more on demand 0 on demand0.nl.

Learn more about our demands

We are a diverse group of ordinary friendly people who are deeply concerned about the climate and ecological crises. We are mothers defending our children, we are children aspiring to have a future and we are grandparents rebelling for life. In less than a year, we have grown from a small group of people to a competent, powerful and fun social movement with hundreds of local groups in almost sixty countries. Join us Check our Facebook page 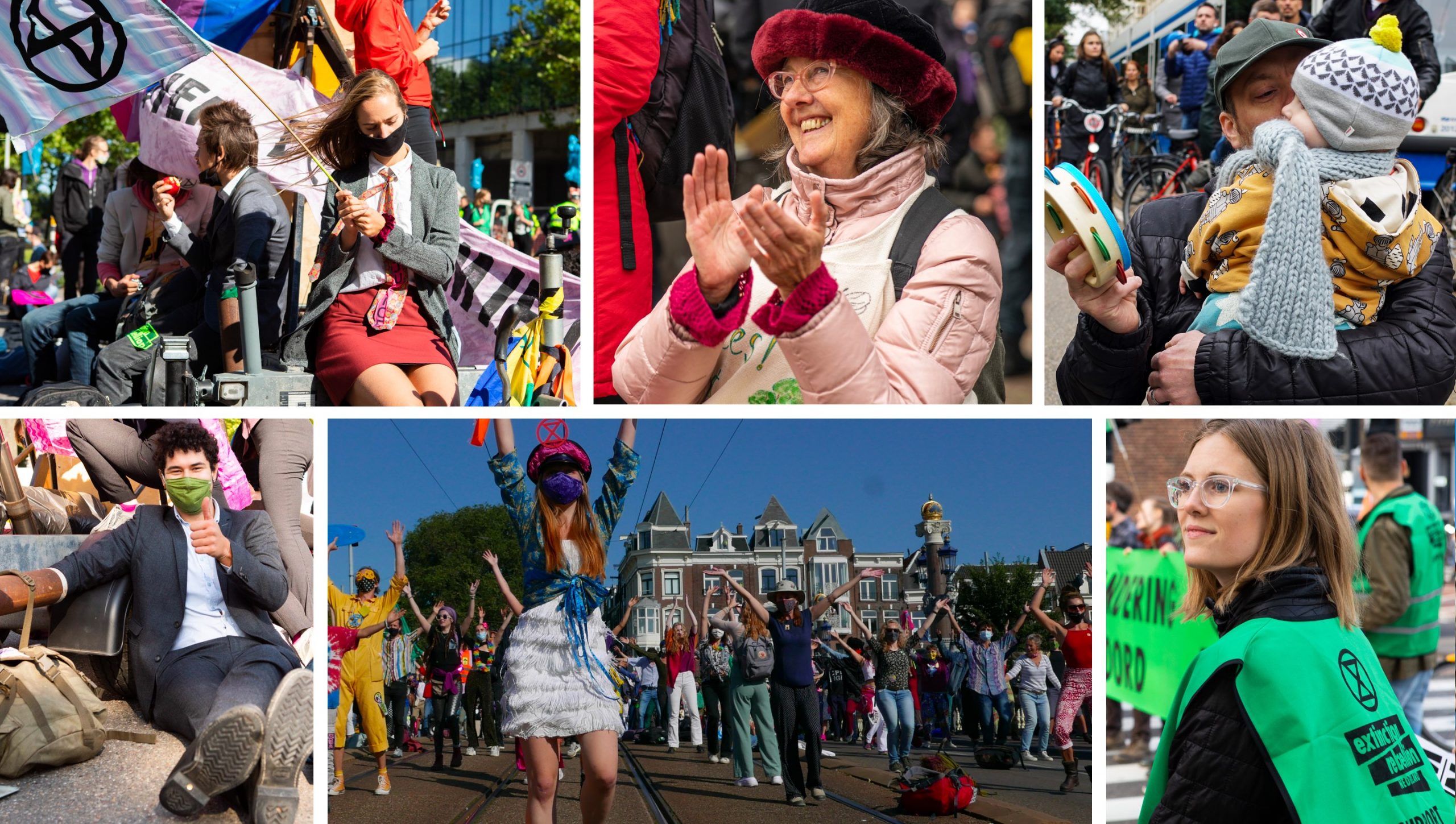 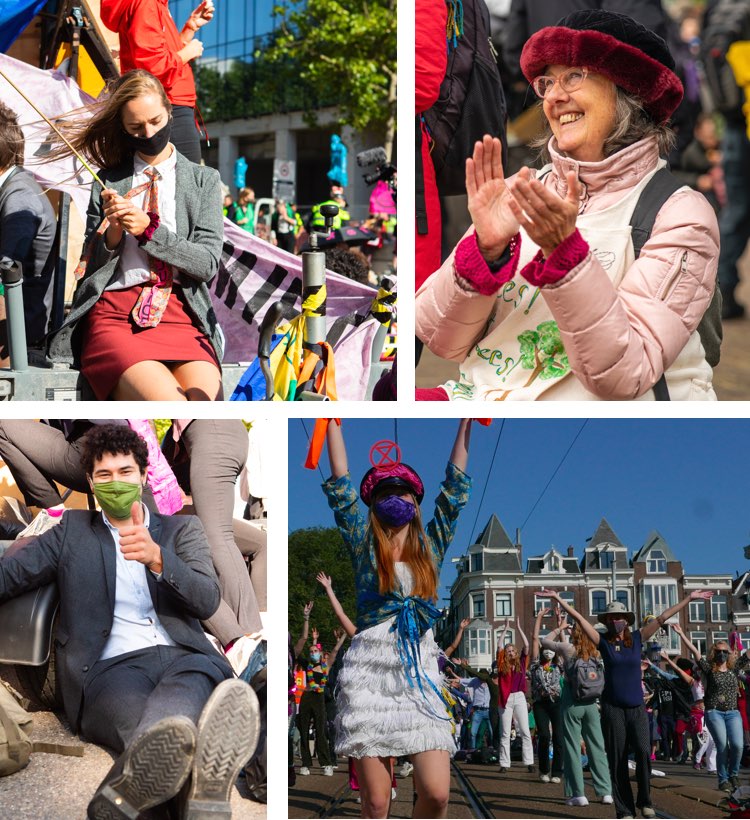 We organise in small, autonomous groups distributed around the world. These groups are connected in a structure that is constantly evolving as we grow and learn. We are working to build a movement that is participatory, decentralised, and inclusive. All are welcome that support our principles, values and mission:
Principles and values

Anyone who follows these core principles and values can take action in the name of Extinction Rebellion.

The Earth is in flames.

Hundreds of years of exploitation and destruction have brought us to the brink of extinction. People all over the planet are losing their way of life, their environment and their lives. We have only a few years left to avert the worst consequences of the climate crisis, if we are not already too late. The sixth mass extinction has begun. What we do in the next few years will determine the future of life on Earth.

We are people from all corners of the country, of different ages and backgrounds. What binds us together is a deep concern about the climate and ecological crisis and life on Earth. We are grandparents, parents and children who are part of an international movement fighting for a liveable and just planet.

Connection
We are driven by a deep sense of connection to life on our planet. For too long, Western governments and corporations have put the interests of white, rich, and powerful men above that of the rest of humanity and non-human nature. The Western worldview must change. We cannot tackle the climate and ecological crisis without looking at our relationship with the planet in a different way. It is an illusion to think that humans can be separated from the rest of nature. Or that we can dominate it with impunity.

System change
Infinite growth on a finite planet is impossible. Any economic system based on it is doomed to failure and inevitably leads to the destruction of the planet. The current economy is unfree, unequal and undemocratic. A small minority consumes far more than our planet can handle and shields itself from the consequences. These problems cannot be separated from the system. That is why we need to change the system. We need a new economy that operates within the limits of the planet and is based on democracy, justice and resilience.

Climate justice
Tackling the climate crisis is about much more than reducing greenhouse gases. To survive and thrive as a species, we need to find a new way of living together. We cannot allow ourselves to be driven apart by a policy of divide and rule. Solidarity with all those groups who have been fighting for justice for years is not only the right thing to do, but it is desperately needed in the fight for climate justice. The system that causes the climate and ecological crisis is the same system that creates racism, sexism and other forms of oppression and exploitation. We cannot fight the climate crisis without standing up for climate justice!

Political change
Both the lived knowledge of Indigenous peoples around the world and the climate science are overwhelming. The vast majority of people say that the climate crisis is one of the greatest, if not the greatest, challenge of our time. Yet governments around the world refuse to be honest about the climate crisis or to address it seriously. By putting the short-term interests of the very rich first, they are playing Russian roulette with the Earth and its inhabitants. The government must face the facts and fight this existential threat.

Rebel for life
Our economic and political system is driving the Earth to destruction. That is why we are rising up to protect life on Earth. We call on everyone to join us!

We consciously and peacefully break the law with actions to call attention to the destruction of our planet.

Backed by the lived knowledge of Indigenous peoples around the world and the overwhelming consensus of science, we conscientiously, and in full awareness of the consequences, declare a state of Rebellion against our government.

We rebel in solidarity with frontline communities of the climate and ecological crisis.

We rebel out of a deep love for the Earth and its inhabitants.

We rebel for life.

Extinction Rebellion is a dynamic movement. We keep learning, evolving and updating our strategy accordingly. In 2022 we made a new long term strategy.

In 2020 Covid forced us to cancel the planned Spring Rebellion. In two online Peoples Assemblies we worked on our Vision for XR in Times of Covid. Later that year, in an extensive process with a survey, input from the national circles and two Peoples Assemblies we created a strategy for the coming year.

In a Peoples Assembly organized by the collaboration circle, the movement explored how Extinction Rebellion NL can be an active part of a movement of movements. Read the full collaborations strategy here.
In this communication strategy (in Dutch) the media circle talks about how we can effectively communicate our principles and values, demands and actions.

We are organised as a decentralised structure of small autonomous groups. This structure aims to distribute authority to individuals in roles with clear mandates, empowering those individuals to make decisions and take actions on matters specified in their mandate—without the necessary consensus of a group. We use group decision making only when it’s necessary and not by default because it can be drastically slower. Despite our decentralised structure, we are highly cooperative and always ask for the input of a diverse set of people from different groups before making important decisions.

This structure enables us to act quickly in response to fast-changing situations while still institutionalising the valuable lessons we learn along the way.