Today, Thursday, Jan. 26 around 7 a.m., police arrested at least six nonviolent climate activists for incitement*, including XR rebels Jelle de Graaf and Tessel Hofstede. Police entered the home of a seventh climate activist, actor and XR rebel Sieger Sloot. After searching his home, the officers had to leave empty handed as Sloot was not present. For a number of these activists, the arrest intervenes in their family life. Children are forced to stand by and watch as their parent is taken away by uniformed officers for peaceful climate action. The arrests are part of an effort to suppress the peaceful blockade of the highway A12 next to parliament and the ministry of Economic Affairs and Climate Policy, on Saturday, Jan. 28, which can already count on over a thousand participants. The arrests follow the announcement by lawyer Willem Jebbink to public prosecutor mr. W.J. Veldhuis that activists will cooperate with requests for interrogation and therefore arrest is not necessary. Extinction Rebellion condemns the criminalization of nonviolent climate activists. The right to peaceful protest is being trampled by the Dutch state.

Lawyer of the arrested climate activists, Willem Jebbink: “It is disappointing that the prosecution had once again decided to arrest people while Extinction Rebellion has let it be known through me that anyone suspected of incitement is willing to come forward for questioning. These arrests are disproportionate as far as I am concerned. Last year, the Amsterdam Court of Appeal clearly ruled that calling for blockades is not a criminal offense because the intent is not to commit criminal acts, but to call for peaceful protest. Therefore, it is incomprehensible that the prosecutor continues to arrest people in this way. We have apparently ended up criminalizing people who engage in and call for peaceful demonstration. I consider that extremely worrying.” 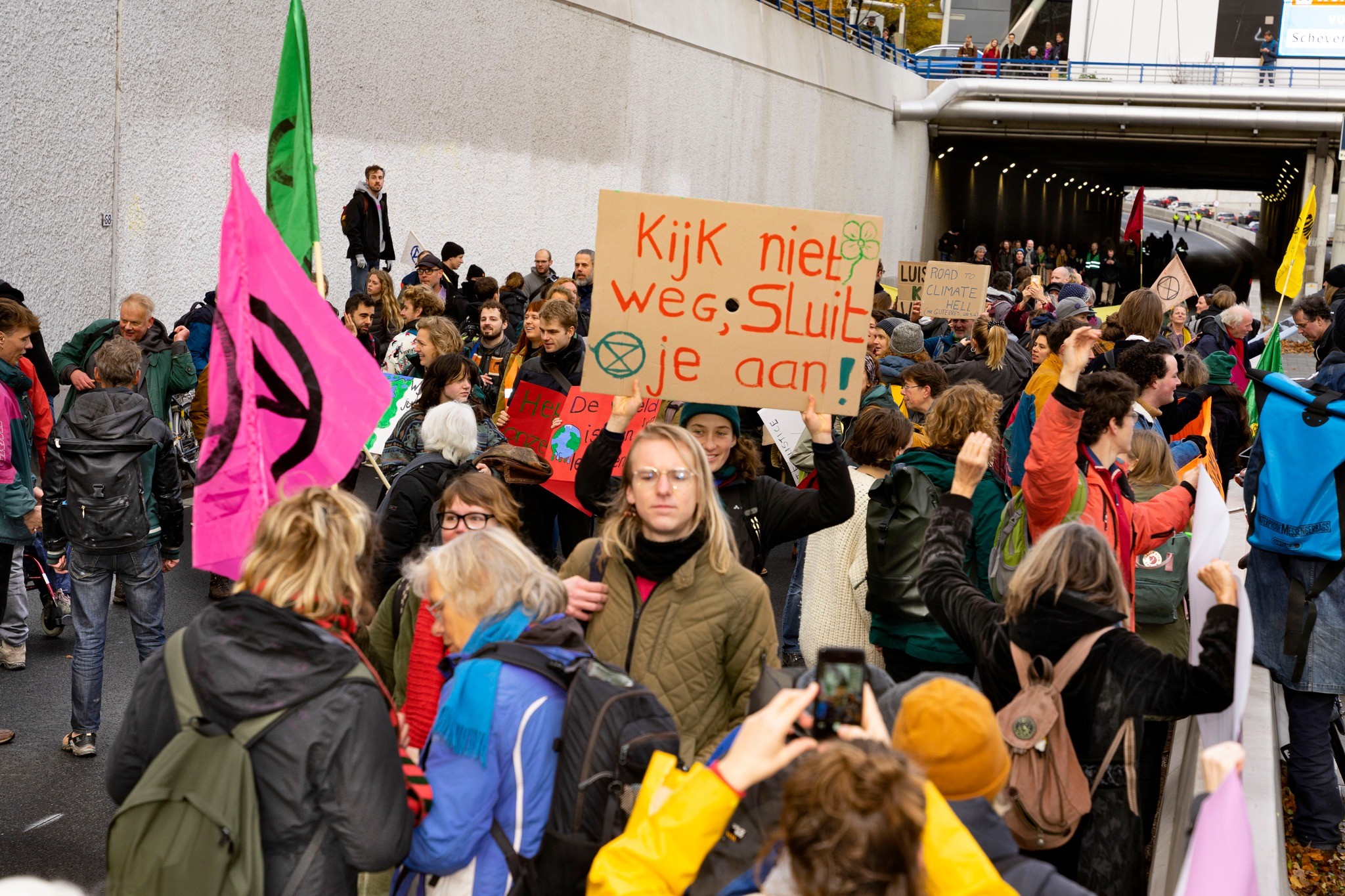 A12 Blockade is protected by right to protest

The A12 Blockade will commence this Saturday, January 28, at noon. More than a thousand concerned citizens are ready to raise their voices and nonviolently demand an immediate end to the annual 17.5 billion euro fossil subsidies.[1] Today’s arrests follow the recent arrest of nonviolent climate activist Lucas Winnips. He was jammed by plainclothes officers on his cargo bike on his way back from taking his youngest child to school around 8:30 a.m. on Thursday, Jan. 19. Since then, numerous individuals and organizations have expressed their disgust and concerns. Despite the detentions, Extinction Rebellion continues to engage in civil disobedience action because it is within its rights to do so. The European Court of Human Rights has  ruled that a roadblock is within the bounds of peaceful demonstration, even if it causes congestion on major traffic routes. Since the A12 Blockade has been announced well in advance, there is plenty of opportunity for authorities to facilitate it, as is their duty. Extinction Rebellion has also contacted the Department of Public Works to ensure maximum safety.

Since the first A12 blockade last summer, calls from society for an end to the 17.5 billion euros of fossil subsidies by the Dutch government have skyrocketed. Nearly 400 prominent economists are calling on the government[2] to end fossil subsidies. Dozens of scientists and celebrities signed a call for peaceful civil disobedience[3] and more and more of them are openly joining Extinction Rebellion. Healthcare professionals are also joining the blockade. XR Healthcare professionals spokesperson and psychologist Petra Verdonk: “Tax breaks for big polluters like Schiphol, Tata Steel and the Port of Rotterdam have a direct effect on public health. People who live near polluting industries are more likely to get sick. Living in Rotterdam is equivalent to smoking seven cigarettes daily. Fossil subsidies are deadly and must stop immediately.”

Meanwhile, the Lower House is demanding transparency [4] from Energy and Climate Minister Rob Jetten on the total amount of fossil subsidies. XR spokesperson and law student Hannah Prins: “The fact that society is vocally demanding an end to fossil subsidies is causing the judiciary to crack down more and more on peaceful protest. Let it be clear that Extinction Rebellion will not stop these actions until the government fulfills its duty of care towards its citizens and acts now on the climate emergency. Extinction Rebellion is growing tremendously, our action trainings are bursting at the seams. The government can get ready for larger and larger actions. We demand an immediate end to the 17.5 billion fossil subsidies. Until they accede, they should count on daily peaceful civil resistance.”

Earth is heading for 2.5 – 4 degrees of warming: climate chaos

At the end of 2022, the UN sounded the alarm by concluding that we are far off course to limit warming at 1.5C.[5] We are heading for 2.5 – 4 degrees of warming, conditions in which large parts of the world will become uninhabitable. The Netherlands will largely disappear under water. We will face global food shortages and hundreds of millions of people will have to flee their homes. CCA spokesperson and mental health worker in addiction care Rozemarijn van ’t Einde: “The Netherlands promised seven years ago, in 2015, to stop fossil subsidies. But still subsidizes oil, gas and coal companies with 17.5 billion euros every year. Energy tax rebates, tax exemptions for coal plants and kerosene: the government is literally fanning the flames. The United Nations want an immediate end to fossil fuel subsidies and our country’s highest court has already ruled that our government’s climate policy does not adequately protect citizens’ human rights.”

What is Extinction Rebellion?

XR is a global civic movement dedicated to preserving life on Earth. Rebels of XR put pressure on governments – with peaceful, creative and disruptive actions – to get them to act on the climate and ecological crisis. Since its founding in 2018, XR has become one of the fastest-growing civil movements in the world. It brings together ordinary people, from all parts of the country and of all ages. In the Netherlands, a large majority is concerned about the lives of current and future generations. We see this trend reflected in our movement; every month more local XR groups are active.

From the underlying demand CLIMATE JUSTICE FOR EVERYONE, XR makes three demands of the government:

1. BE HONEST about the climate crisis and ecological disaster threatening our survival. Make people aware of the need for large-scale change.

2. ACT NOW to stop biodiversity loss and reduce greenhouse gas emissions to net zero by 2025. Do this in an equitable manner.

3. LET CITIZENS DECIDE on an equitable transition by establishing a citizens’ council to take a leading role in decision-making.